Naresh Sohal was born in 1939 in Punjab, northern India. There was a strong folk music tradition in the region, but there were no musicians in his family. Naresh’s father, however, besides being a civil servant, was a renowned Urdu poet and the boy developed an ear for the spoken word through serving tea at poets’ gatherings.  From an early age, he showed an interest in popular music, his tastes being influenced by the broadcasts of All India Radio and Radio Ceylon. 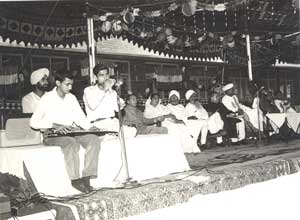 By the time he reached college, where he was enrolled for a degree in Mathematics and Physics, he had acquired a harmonica and become a versatile performer of rock and roll and Indian film songs. He learned all works by ear. With a select band of friends he entertained his fellow students at social gatherings, even playing once before the President of India. He began writing works for the Punjab Armed Police band, providing them with waltzes, marches and pieces reminiscent of the early European music which he had never heard.

Keen to push forward the frontiers of his musical knowledge, he asked a musician in the classical tradition to teach him Indian classical music on the mouth organ. The musician refused. Annoyed by the disdain with which he was treated, the young Sohal determined there and then to abandon his degree course to go in search of people who would be more generous with their musical knowledge. He spent a few weeks in Bombay, lured by the film industry. There, during the monsoon season, he heard Beethoven’s ‘Eroica’ Symphony on the radio. It was his first experience of European classical music, and it had a profound effect. In 1962 he left India for the U.K. intending to find a way of learning to write western music.

Sohal arrived in London with £2 (yes, that’s just $3.20!) in his pocket.  It was the era of black and white T.V., and black and white attitudes to employment and accommodation. Sohal moved from one grisly room to another in London’s most unfashionable quarters. After a few gruelling months, he landed a job as a copyist with Boosey and Hawkes, the music publishers, on the strength of his skill with pen, ink and ruler and his ability to read music.

When it came to composition, Sohal was primarily an auto-didact. In the evenings he attended various educational institutes to learn western music theory and began writing his own work. But he found these classes stuffy. The job at Boosey’s, on the other hand, allowed him to see at close quarters how established composers marshalled their forces.

At first, he was immersed in light music, copying, among other things, material for Joe Loss and his orchestra and the music for Lawrence of Arabia.  But one day, the copyists were played Eonta, a new work by the Greek composer, Xenakis, which was considered to have considerable curiosity value, the entire dynamic of the piece being determined by mathematical calculation. For the first time, it occurred to Sohal that music could be about ideas and not just pretty melodies with harmonies attached to them.

As a freelancer, he now had more time to spend on his own composition. In 1965, he completed his first orchestral score, Asht Prahar, a tone poem based on the Indian concept of the eight periods of the day. Immediately after came Surya (1965) for chorus, percussion and solo flute. The text is in Sanskrit and is taken from the Rig Veda.

Sohal had to wait until 1970 to hear what he had written.  In 1969, the Society for the Promotion of New Music selected Asht Prahar for a public performance in rehearsal at the Royal Festival Hall where it was played by the London Philharmonic Orchestra under Norman del Mar.  The work was well received. The SPNM then commissioned Kavita I, for soprano and eight instruments, and this was written in 1970, the same year as the orchestral piece Aalaykhyam II. In February 1971, the BBC broadcast a performance of Surya given by the Ambrosian Singers and in November, Andrew Davis conducted the first performance of Aalaykhyam I. Sohal was now up and running: he was composing full time.